Coming to Ba Ria - Vung Tau is just to enjoy the blue sea, white sand and yellow sunlight, you must have missed something. Although it is a new land of 30 years old, Vung Tau has had its own indigenous culture - things not easy to be mixed with others. Especially, when Tet comes, waves offshore bring with them winds, sunlight and the whole atmosphere of a spring.

It will be different feelings when celebrating Tet on a remote, faraway islands where the spring comes on each waves, comes with the salty taste of the sea, comes on flowers blooming along the way from Co Ong Airport to the town center. Taking a walk on beaches at dawn or dusk, you can find how generous the nature has offered. It will be more interesting to go angling or to dive down to see the coral reef under the blue sea. 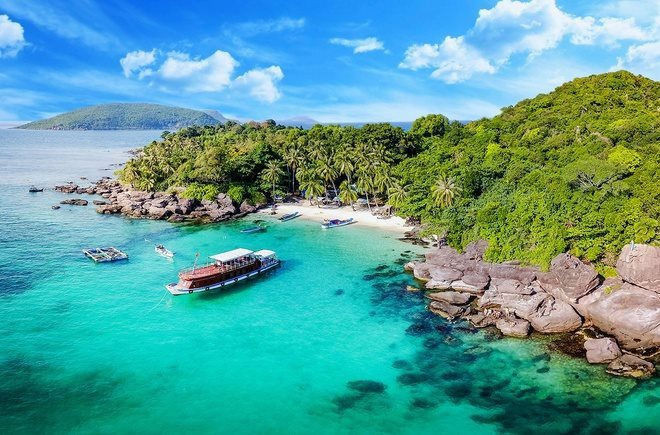 Con Dao - an island with pain and loss in the long war for independence and freedom of the country. But today, after years of hardships, a spring in the island is full of blooming flowers - a bustling, shimmering spring with its inherent peace.

Springs come to the island with clouds hiding peaks of mountains, with cool weather. Springs come on roads decorated with thousands of flower pots and plants according to the theme of each year, with lanterns and trays of five fruits...

People in fishing villages are also busy welcoming Tet as those in other regions are: family gathering; mothers going to markets to buy leaves for wrapping banh chung, banh tet; fathers choosing pots of yellow ochna flowers and chrysanthemums for decoration in new year days. 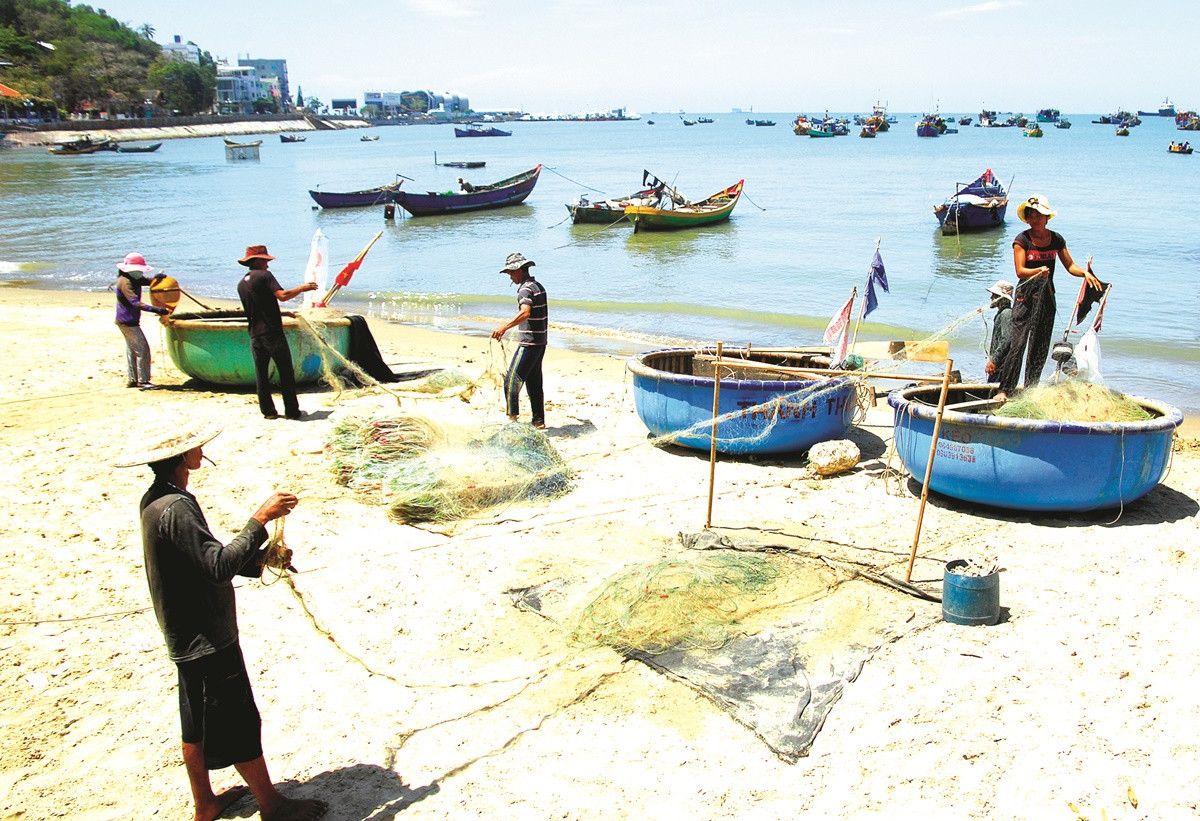 But unlike those in other villages, the people of Ben Da and Ben Dinh fishing villages still have pot of braised fish, a plate of boiled shrimps in addition to in a tray of offerings for Tet. And especially they clean their boats, decorate them with flowers, and make and offering of New Year on them, after the last offshore catching of the old year and the first one of the new year.

The smell of cooking smoke is mixed with the salty smell of sea breezes.

Sometimes, there are boats welcoming New Year’s Eve offshore- a simple eve on the waves. Those ships will return with full of fish and shrimps, with hopes of a fruitful new year, with smiles from those waiting on the berths.

Spring comes with roads of flowers

The road leading home is familiar to us. But in every spring, we, who living far away from the homeland, burst joy and excitements of coming home. The streets of Vung Tau in spring are filled with flowers, roads of flowers by the sea. The sounds of waves crashing, the salty smell of spring breezes make us moved. 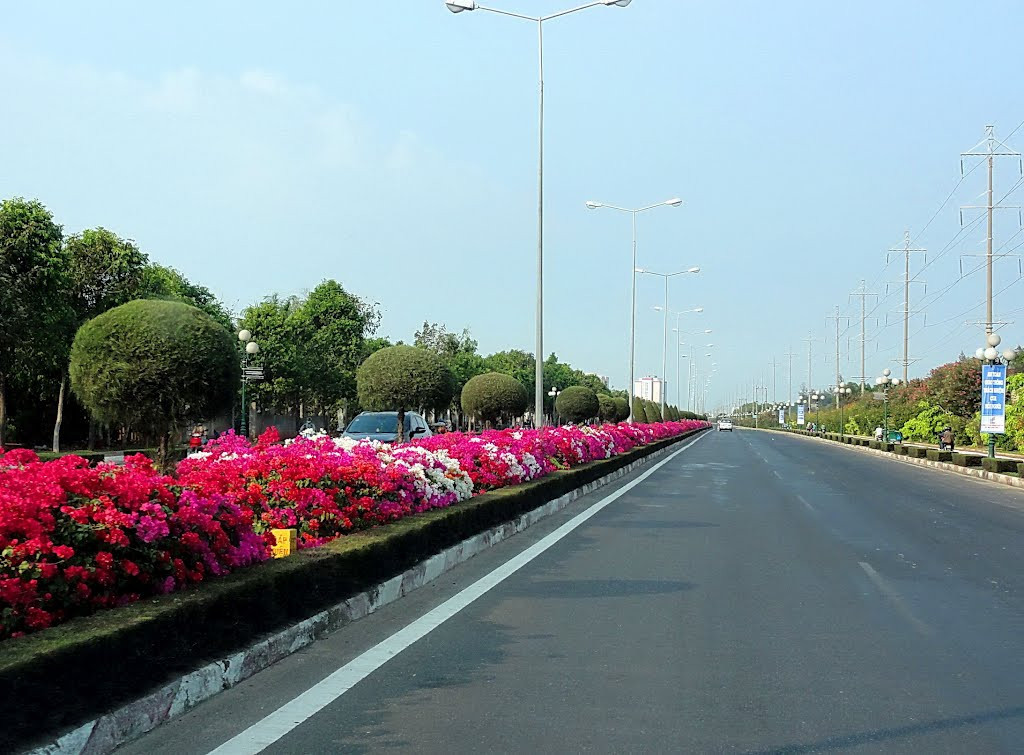 As usual, I go to pagoda with my mother on first days of the year. Normally we go to Truc Lam Chan Nguyen Zen Monastery, at the foot of Minh Dam Mountain, Phuoc Hai. Here we can find a majestic but peaceful nature that we can forget all uncomfortable daily trifles. Monkeys coming down from the mountains to the monastery play or ask for food, which also makes the monastery famous.

Chon Khong Monastery is located at an altitude of 80 meters on the slopes of Nui Lon (Big Mountain), Vung Tau City. There are many splendid works such as the ancestral tower, the bell tower main hall, the meditation hall and the large area for monks and nuns.

The road leads to the monastery is rather sloppy with rows of old trees along the two sides. On the bell tower, you can have a dioramic view of the sea, you can hear the sounds of waves crashing and the sounds of trees whispering.

The name Chon Khong originally meant to talk about the inherent immortality of human beings. Come here and find things by yourself, especially with a pure mind in the mist of daily trifles. 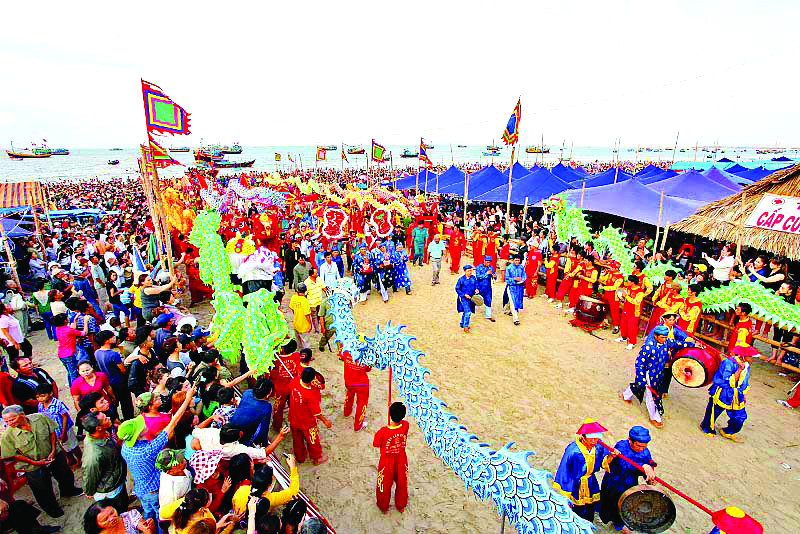 Dinh Co Festival is a special festival of the land, praying for favorable rain and winds and to honor “Young Lady”- Le Thi Hong Thuy, a goddess sent down from heaven to protect Long Hai village. She let villages see omens in their dreams and protect them from epidemics. Fishermen coming to worship her usually bringing a branch of white lily- a symbol of purity. They came to ask for her protection and give them a safe and bountiful offshore catching trips.

On the eve of the festival, there is normally a lantern festival on the sea. Boats with lanterns anchors by the beach, with prows heading to Dinh Co Cape. On the main day, they are heading offshore for a Nghinh Co Festival (Welcoming Young Lady). After the ceremony are festival activities to entertain local people and tourists...