(VLR) (Vietnam Logistics Review) To replicate single efforts on applying Industry 4.0 and ease the worry that Vietnam will be a technology dump-ground, the systems of college and vocational study, together with the whole society, should start its orientation work for young people who start work from their creativity and technology innovation.

(Vietnam Logistics Review) To replicate single efforts on applying Industry 4.0 and ease the worry that Vietnam will be a technology dump-ground, the systems of college and vocational study, together with the whole society, should start its orientation work for young people who start work from their creativity and technology innovation.

The worry of being a “technical dump-ground”

In the Government periodical meeting in March 2017, on the morning of April 3rd, the Ministry of Science& Technology and representatives of experts from Vietnam Software& IT Service Association had reports on Industry 4.0 and some solutions on how to avoid “missing a boat of Industry 4.0”. These updated information showed that Industry 4.0 is now of the Government’s concern.

Besides receiving the newest technology in mobile media field, Vietnam has had remarkable achievements in receiving industry 4.0. For example, in the field of medicine, Vietnam doctors have had success in kidney and organ transplants and they also had remarkable advancement in blood stem cell transplant in cancer treatment. In 2016, Cho Ray Hospital used 3D Printing Technology to create a piece of artificial skull bone with methyl methacrylate and used it in a case of concussion surgery. In the field of Artificial Intelligence (AI), Social Network Data Hunting system by Topica AI Labs or using Chatbot to replace human in some works as answering the phone, writing email and booking schedule for researchers at Vietnam Alt Co.,

Besides single bright spots, there is concern that Vietnam will probably become a technical dump-ground of other countries, by recklessly importing outdated technologies. In the field of coal-powered thermal plants, in many countries they are written off for causing serious environment pollution. 109 of thermal plants in Europe were closed; in the U.S, 165 stopped operating and 179 newly-built projects were canceled; in China, 85 ones on 13 provinces and cities were stopped operating, including 18 others were decided to break off at the end of last year. Meanwhile, series of thermal plant projects have been blooming in Vietnam: Long An Thermal Plant Center, Quang Trach 1, Quang Trach 2, Vung An 2, Nghi Son 2… not including 20 existing ones (14 in the Mekong Delta, 10 of them were invested by China).

Eric Sidgwick, National Director of Asia Development Bank (ADB) in Vietnam, gave a warning at the press talk Asia Development Outlook (ADO) 2017 on April 10th in Hanoi. In his lecture, he expected Vietnam will pay attention on not becoming China’s technology dumpground.

Start-up is the progress of realizing business ideas, based on producing or applying a research result, technical solutions or management solutions to improve capacity, quality or added values of a product.

Large companies worldwide like Microsoft, Yahoo, Google, Facebook, Amazon were born and well developed by having breakthrough creativity and making good use of new technology of the internet era in the third industrial revolution. Recently, companies as Uber and Grab created a business model and managed their transport services on digital based technology, becoming a fearsome competitor to tradition taxi transport companies.

Start-up is now a large matter that the Government and other levels of authority are paying attention to. Resolution 35/ NQ-CP signed May 16th, 2016 showed the high determination of the Government on supporting and developing enterprises to 2020. And to implement the resolution, the Ministry of Education and Training held a conference discussing mechanisms and policies that support students’ start- up on October 2016 in HCMC, in which start-up will be put in university syllabus. HCMC issued “Coordination regulations supporting start- up and innovations” supporting startup projects by using city budget to support at most VND 2bn for each start-up project. Some universities had had start- up fund for students. However, the implementation of these policies and regulations should be based on reality and scientific basis, or they can be a kind of “movement” easily.

Some typical cases of starting business by technical innovation coming from the young people. In the list of Top 18 Startup by VnExpress, most of them have developed and provided services on the base of internet. Provided services varies from the field of medicine with companies as ViCare, Plasma Vietnam and mediThnak to the field of real estate, transport, F&D, maid service, education, tourism… There appeared new models of production in Vietnam: “made in Vietnam” cold plasma machine for injury treatment, industry robot system by Robotic 3T, Dobody app showing regional shortage so that patrons are able to meet local people’s requirements, or Perkfect by Nguyen van Toan- an 9x man. A case of business start-up was broadcast on BBC World in the series of The Boss is that of young businessperson Truong Thanh Thuy with Whiteboard app- a drawing app on mobile devices- and Tappy app for group work in a cyber-community. 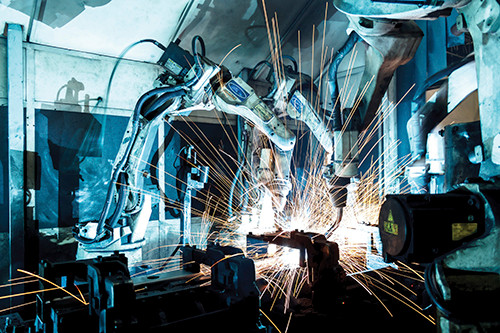 One of the trends is starting business with clean agricultural field with valuable products: black garlic, lingzi mushroom and Hemibagrus wyckioides… or the example of Nguyen Phuong Nam, producing coal from rice husk, and then non- toxic smoke-free briquettes.

In the context that many young people start their business by being a street peddler, being a motorbike taxi driver for Grab or making money online, these examples should be respected and replicated. Although most of the projects are small in size and lack characteristic of breakthrough, they are bright spots toward the ship of Industry 4.0… in the worry that Vietnam is slow-paced and becomes a technology dump-ground.