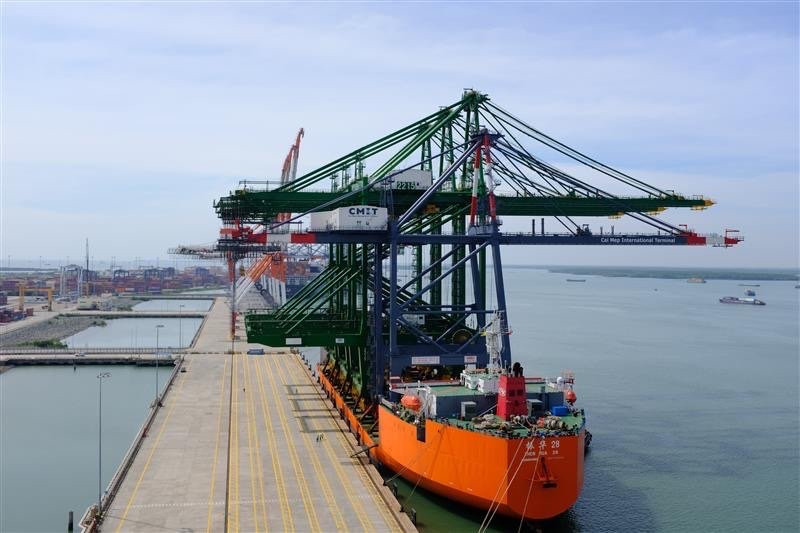 Vessel ZHEN HUA 28 under flag of Hong Kong has arrived at CMIT to deliver the sixth quay crane to terminal. This new super post-panamax STS has the same specification of existing five quay cranes with 1,500 tons weigh, lifting capacity of 100 tons, outreach up to 23 rows and is capable of handling mega vessels 214,121 DWT currently calling CMIT in regular basis. Besides the sixth STS quay crane, CMIT has also invested in 6 new terminal trucks and some other equipment recently.

This 6th STS crane is expected to complete installation and testing in December then in commission from January 2022. CMIT productivity is currently at high level, averaging over 32 moves per hour per crane and expected to be improved more. Offering outstanding world class levels of operational performance through continuous investment in modern equipment not only brings more benefits to our customers but also helps to position Cai Mep at higher level in the global terminal operating industry.

“The investment in additional super post-panamax quay crane and other equipment is the result of CMIT’s relentless efforts and this is crucial first step of our business development strategy. This helps CMIT prepare the resources to better serve robust growth of Vietnam’s foreign trade in near future”, shared by Mr. Nguyen Xuan Ky, General Director of CMIT.

CMIT has grown at a robust pace, especially in the last five years, and been operated at the designed capacity so far. For period of 2016 until now, CMIT has accommodated nearly 2,000 international vessels deployed on different service routes to America, Europe and Asia market, of which the majority are vessels capacity above 132,000 DWT, the mainline volume reached approximately 5 million TEUs. Shipping lines and alliances keep bringing more services and mega vessels to call CMIT. Currently, CMIT is one of the very few terminals in the world capably to accommodate such mega vessel capacity up to 214,000 DWT.

As an important link in the national foreign trade flow, that CMIT’s investment in additional super–post panamax quay crane demonstrates the great faith in the economic recovery and the strong development of an export-oriented country like Vietnam.