(VLR) (Vietnam Logistics Review) “What will we dream about when Long Thanh Airport to be put into operation?” I wonder myself and hope our airline service will have the same development with Ataturk Airport in Europe in the coming time.

(Vietnam Logistics Review) “What will we dream about when Long Thanh Airport to be put into operation?” I wonder myself and hope our airline service will have the same development with Ataturk Airport in Europe in the coming time.

I had to transit at Istanbul Ataturk International Airport, Turkey, on the way to Paris, France in my trip to Europe. My first impression: crowded but there was no jostling and all services available to satisfy all customers’ needs.

Istanbul Ataturk International Airport is Turkey’s largest airport. It is around 24km from the downtown of Istanbul and it was put into operation in 1924. The airport is located at Yeşilköy, the European part of the city. It was named after Mustafa Kemal Atatürk- the founder and first President of Republic of Turkey.

The airport has been considered a vulnerable target. Although there was an X-ray scanner at the entrance, car security inspection was quite moderate. On June 28th, 2016, an attack to the Turkish Cargo airport with 49 dead and 239 injured was globally shocking, 13 of dead people were foreigners. Three attackers belonging to Islam State (IS) came to the airport in a taxi and then opened fire at the entrance. They detonated suicide bombs when the police counter-attacked them. 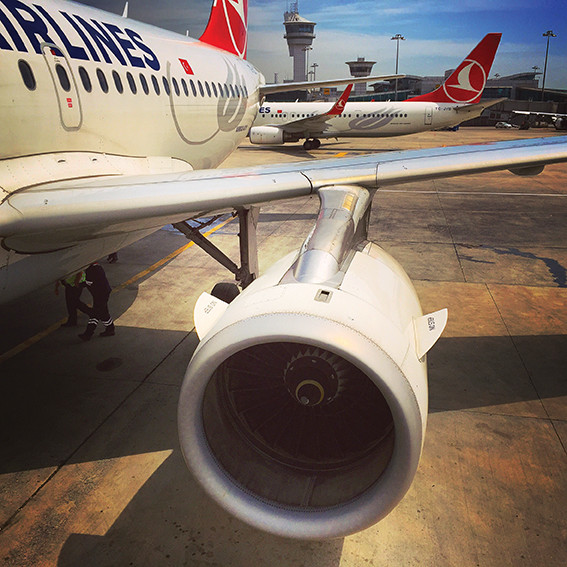 Heathrow is the largest in five airports in the U.K and it has been in upgrading progress: Terminal 2 is being newly built. Heathrow is the center of British Airways and Virgin Atlantic. The average number of customers is 75.7m in average.

Charles de Gaulle International Airport is France’ largest one and it is also a global key aviation center. In 2012, the amount of cargo in the airport ranked the 12th in the world and the 2nd in Europe. In 2014, the airport received 64m passengers and 65.9m in 2016. The number increased in 2017 thanks to the increase of the number of tourists. Charles de Gaulle has 3 terminals. The terminal no.2 is bow- shaped and divided into 6 parts. The airport normally has high rank in term of passenger ability compared to that of other airports worldwide.

Charles de Gaulle and Istanbul Ataturk has recently been terrorists’ targets. Therefore, tight security is obvious. They also have larger targets: bringing more benefits and satisfactory to their passengers.

Previously, in 2004, Nguyen Nguyen Hung, General Director of Southern Airport Cooperation informed Long Thanh Airport will be built on the area of 5,000ha with the capacity of 80m passengers pa and it will be partly put into operation together with the use of the existing Tan Son Nhat Airport.

However, until the afternoon of November 24th, 2017, the Assembly of Term 14 approved the Resolution on feasibility study of Long Thanh International Airport. According to it, Long Thanh, with the area of 5,000ha, will have the design of a 4F airport- the highest rank of International Civil Aviation Organization (ICAO).

Long Thanh Airport is located in the area of 6 communes of Long Thanh Dist., 43km from Tan Son Nhat International Airport. Long Thanh Airport is expected to be a national important international airport and a leading transshipment center of the region. The project is divided into three phases. Phase 1 will be completed at the latest of 2025 with a runway, a terminal and with the capacity of 25m passengers pa. The airport will be upgraded in term of capacity to 50m passengers pa in 2035 (phase 2) and 100m passengers pa after 2035 (phase 3).

In the trip between Tan Son Nhat, Saigon and Noi Bai, Hanoi- the two busiest airport of Vietnam, I have a dream of an airport like the Turkish Ataturk Airport.