Fighting against the epidemic at the border gate

(VLR) In a short time, consecutive cases of COVID-19 in the community of two provinces of Nghe An and Ha Tinh have made the two localities become “hot spots” for the epidemic. For smooth customs clearance procedures, the authorities of the two provinces have had to modify their forces and implement safe solutions to fight against the epidemic and to ensure goods clearance. 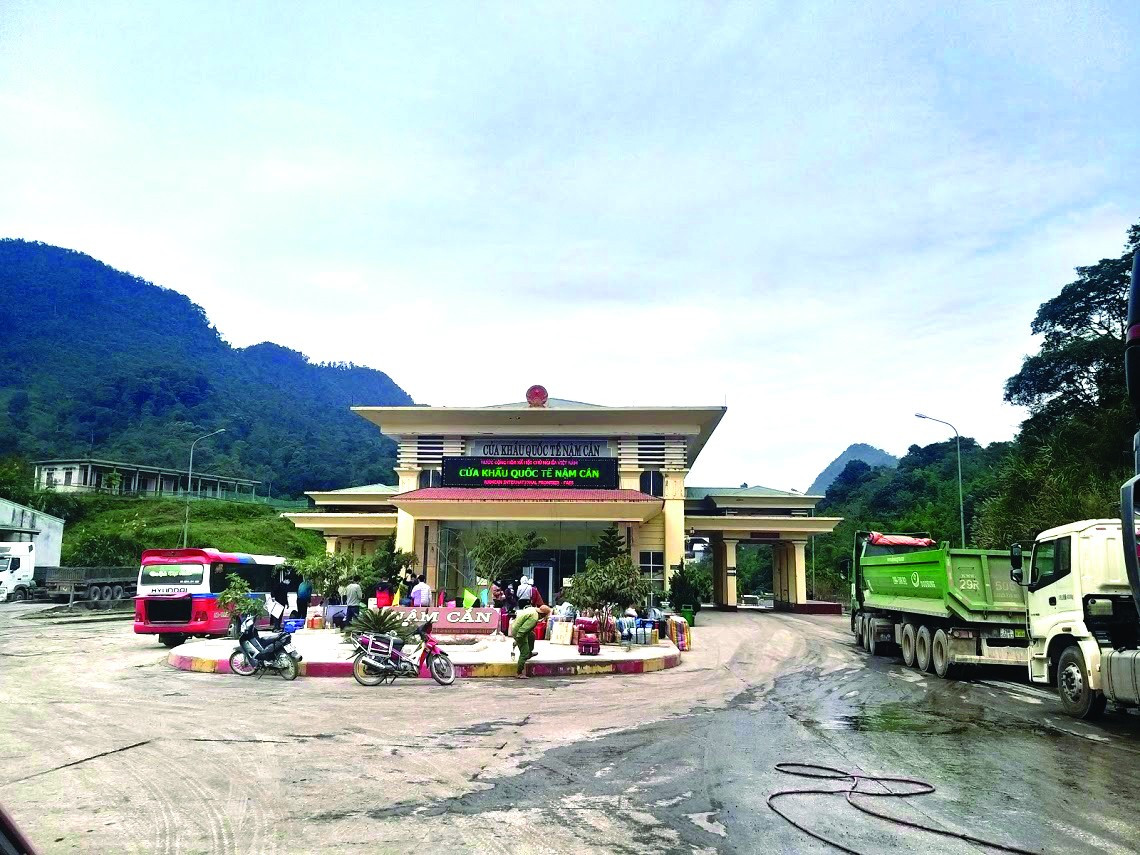 Fighting against the epidemic at the border gate

At the time of complicated epidemic happenings in the two provinces, selling and exchanging goods among enterprises of the two sides through the international gateways of Nam Can and Cau Treo has been large.

Phan Van Nham, Head of the Customs Office of Nam Can International Border Gate said since implementing the model of “changing drivers; changing tractors” to circulate cargo through the border gate a year ago, the functional force here has had smooth coordination and control, which contributes to the task of COVID-19 prevention and ensures continuous cargo customs clearance.

However, enterprises have to endure higher costs. Nguyen Ngoc Tuan- a tractor driver doing customs clearance procedures at Nam Can Border Gate said:” At the time of COVID-19 outbreak, Nam Can Border Gate has imposed strict epidemic prevention measure: only trailers allowed to cross the border and two drivers are arranged to be at two sides of the border, which make the costs double increase compared to that of previous time.

At Cau Treo Border Gate in Ha Tinh, administrative procedures have been reduced and information technology in automatic customs managements has been applied; implementation of online public services has been promoted; the Circular 47/2020/TT-BTC which stipulates the times to submit documents of origin, certificates of origin for imported goods applied in the time of COVID-19 epidemic: enterprises, accordingly, are allowed to extend time of submitting documents to enjoy special preferential tax rates from 30 days to 180 days.

Senior Lieutenant Vo Anh Tuan, Head of Border Guard Station of Cau Treo International Border Gate said due to current complicated happenings of the epidemic in Laos, besides anti-epidemic measures of 5K, the forces in the border gate have agreed to apply the tasks of 100% disinfecting of vehicles transporting goods through the border gate. Changing drivers is imperative.

Maintaining good flows and fighting against the epidemic

Due to impacts as epidemics and natural disasters, the import and export situation at Nam Can border gate in the first 5 months of the year has decreased deeply in all aspects. Since the beginning of the year, the number of visitors to Nam Can International Border Gate has decreased significantly, sometimes by 50%. In particular, since the outbreak of a new epidemic in Laos recently, the number of visitors has decreased sharply because Laos has strengthened control and implemented social distancing. 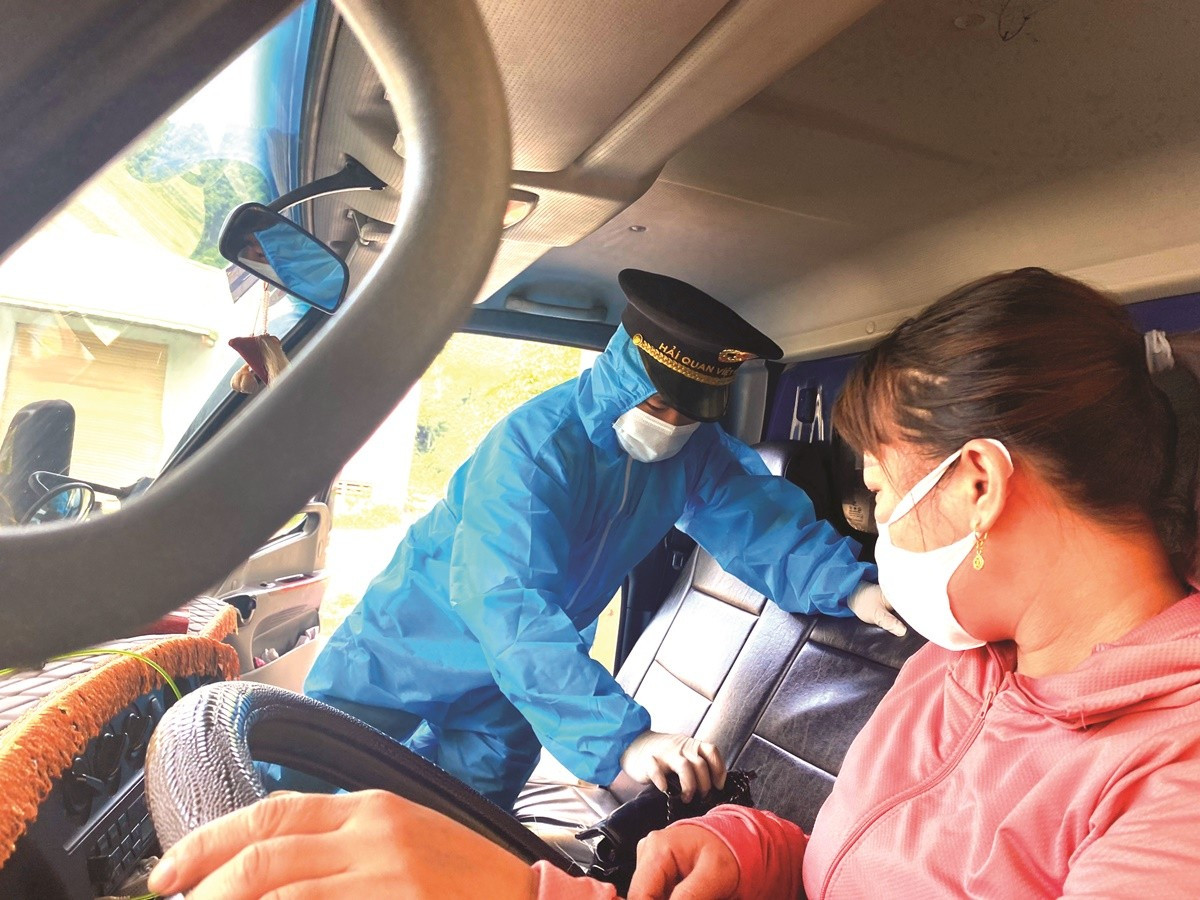 In a short time, consecutive cases of COVID-19 in the community of two provinces of Nghe An and Ha Tinh have made the two localities become 'hot spots' for the epidemic

In addition, having to change drivers and change means of transport also greatly affects the import and export activities of businesses on both sides. In the first 5 months of the year, there were only 56 enterprises participating in customs clearance procedures through Nam Can border gate, including 38 exporting enterprises and 18 importing enterprises, with a total of 5,257 vehicles. Import-export turnover reached just over 14.2 million USD- mainly construction materials, grain, fertilizer, wood, ore, coal...

Facing complicated and unpredictable developments of the pandemic, functional forces at Nam Can international border gate have strengthened inspection and strict control of passengers and vehicles on entry and exit. Cases related to smuggling and illegal transportation of goods across the border; transporting prohibited goods; buying, selling and transporting imported goods without legal documents in the area of customs operations tends to decrease in number.

Phan Van Nham, Head of the Customs Office of Nam Can International Border Gate said there is a lot of traffic of passengers and cargo here. Especially, due to a large number of transport vehicles here, people from other places come here to do business and services. In the first months of 2021, the flow of people, vehicles on entry and exit, import-export goods decreased due to impacts from the pandemic. On average, there are about 300 turns of people and 250 - 260 turns of vehicles on entry and exit through the border gate daily.

Since the pandemic re-outbreak, the functional forces at the two border gates of Nam Can and Cau Treo have been trying to control people and vehicles passing through the border gates to prevent the pandemic. Upon entry, vehicles and cargo are sprayed with disinfectant before doing customs clearance; people on entry have to undergo the medical isolation of 21 days; vehicles on entry and exit have to undergo the process of changing drivers.

“The functional forces at the border gate will continue to coordinate closely to ensure security and prevention tasks against the pandemic of COVID-19. At the same time, they will maintain regulations on coordination, inspection, and controlling people, means of import1export, cargo and tasks of fighting against crimes, smuggling and trade fraud, which will create favorable conditions for border traffic and ensure safety”, said Le Minh Duc, Head of Cau Treo International Border Gate Customs Office.

Thời sự - Logistics
Fighting against the epidemic at the border gate