Nghe An should improve abilities of seaport exploitation

(VLR) As forecast, demand for goods import-export of Nghe An Province through the seaports will increase to 20 - 30 m tons pa. There are 5 seaports which have been planned on the provincial area, but they have not been fully exploited in terms of potentials and advantages. 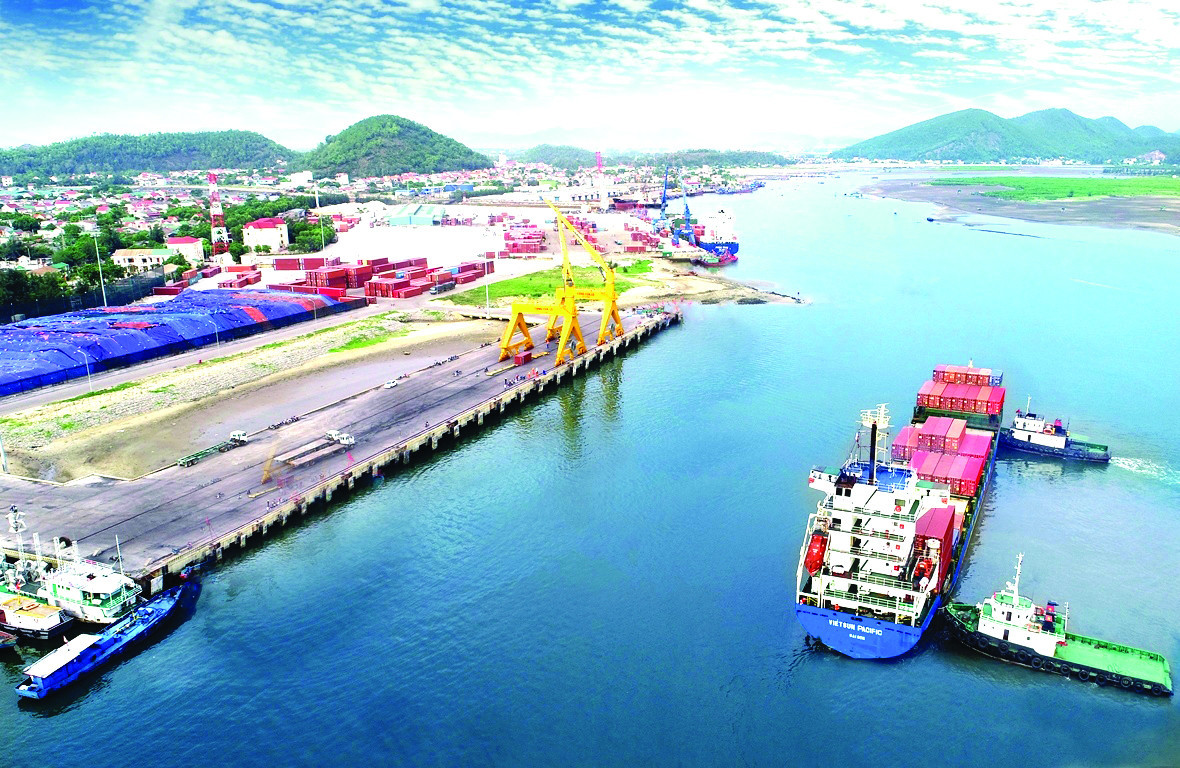 Nghe An province has attracted many enterprises to invest in provincial industrial zones in the past few years. Therefore, demands for import and export of general goods, containers, specialized goods at ports for ships of large capacity from 70,000DWT and over 100,000DWT is huge. However, the seaport infrastructure in Nghe An is still limited. 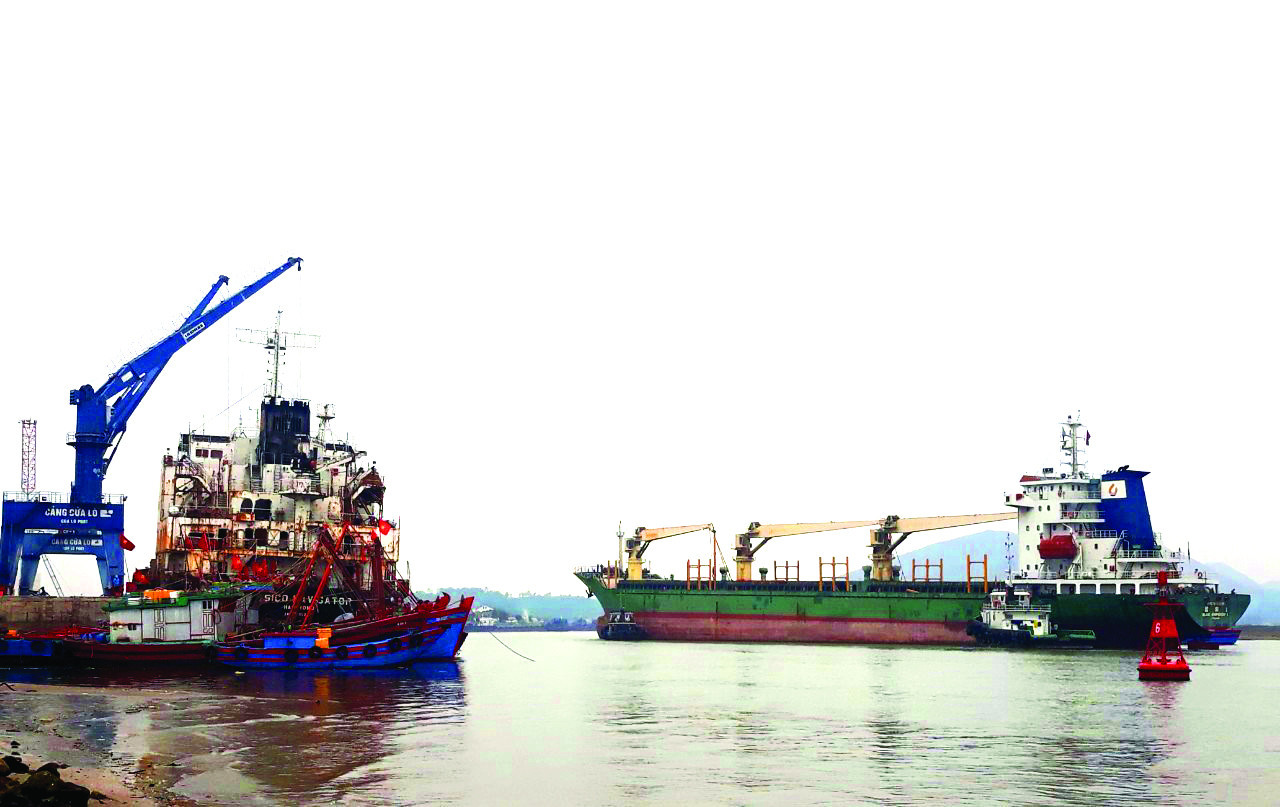 Particularly, the general and container port of Cua Lo Bac (Cua Lo deep-water port) has not yet been invested for construction. The new Cua Lo port area has 5 berths in operation, the navigational way to Cua Lo Port is being deposited (depth of -5.9m), allowing only 10,000DWT - 30,000DWT ships with load reduced to dock. The maximum exploitation capacity of Cua Lo Port Cluster is only 6 - 8 million tons of cargo pa for general cargo and containers. It is forecast that the demand for goods imported and exported through the seaports of Nghe An Province in the coming period will increase to 20 - 30 million tons pa.

For 4 general wharfs invested by Nghe Tinh Port JSC, the water area in front of the wharf is often deposited, currently there is 6.1m deep only compared to 7.2m according to the design, thus limiting vessels with tonnage from 15,000DWT to 25,000DWT with load reduced in and out.

Wharf 5 which Cua Lo Port Ltd., Co. (formerly Tuan Loc Construction Investment JSC) is the investor is capable of receiving ships of 30,000 DWT. However, the actual navigation infrastructure has not yet met needs of transport compared to the design.

In addition, DKC Petroleum Port located in the north of Cua Lo Port area, Nghi Thiet commune, Nghi Loc district, invested by Thien Minh Duc JSC., with the function of a specialized port serving service gas import- export service for vessels from 10,000 tons to 49,000 tons has been put into operation since February 2019. However, the road traffic system connecting D4 road with DKC port warehouse to serve transportation has not been completed yet.

Vissai International Seaport has been a bright sport at Cua Lo Seaport group. As design, it has 5 berths. Current investor- Song Lam Cement Ltd., Co.,- has completed two of them and put into operation as well. The specialized berth no.1 is for vessels of 30,000 tons and the berth no.2 is able to receive vessels of up to 70,000 tons for stevedoring.

To meet the needs of socio-economic development of Nghe An province today and in the coming period, the Provincial People’s Committee invites potential investors to participate in the development and exploitation of the seaport system. In that process, it is possible to upgrade and supplement functions and exploit specialized seaports in the province.

According to Le Ngoc Hoa - Deputy Chairman of Nghe An People’s Committee, the planning and construction of Cua Lo Seaport and Dong Hoi Seaport have an important meaning in the socio-economic development of Nghe An and neighboring localities. The demand for the seaport system in Nghe An is currently a “bottleneck” in investment promotion and economic development of the province with the inadequacies increasingly revealed; therefore, adjustments are needed to untighten the “knot”.

In the meetings between the Ministry of Transport and the People’s Committee of Nghe An Province and consultants, many suggestions were made to expand the scale and add capacity of the ports that have been invested, and to expand navigation ways for large-capacity ships to be able to enter the port. At the same time, it is necessary to review post-port logistics abilities, connecting the port infrastructure with the road traffic network, and connecting with regional ports as Nghi Son (Thanh Hoa) and Vung Ang (Ha Tinh), adding more logistics transshipment area...

Referring to this issue, Standing Deputy Chairman of People’s Committee of Nghe An Le Hong Vinh once affirmed the importance of seaport planning in the current period to 2030 and vision to 2050. On that basis, the province and consulting units must consider the loading and unloading capacity through the group of regional ports; consider feasible plans; have specific calculation for rational construction and exploitation of general, specialized and tourist seaports; review the land fund to make port logistics areas, inland ports, logistics areas...

Meanwhile, Deputy Minister of Transport Nguyen Nhat agreed with a number of investment proposals to upgrade Cua Lo port. At the same time, it is noted that Nghe An province must have a further vision: the planning of seaports and inland ports needs to be in an open direction so that when there is a lot of goods, it can be invested in upgrading without having to ask for permission to adjust the planning because these procedures are very complicated. It is recommended that the consulting unit absorb opinions from the province to complete the planning- an open plan that considers the future.

The formulation of the planning must be suitable with socio-economic development conditions of the province. Besides, Nghe An province also needs to call for big investors to build suitable seaports.

At the recent meeting of the Ministry of Transport with Nghe An Province, the consulting unit gave the orientation of Nghe An Seaport Planning in 2021 – 2030, vision to 2050. That is, Nghe An Seaport will be built to be the seaport type I, serving provincial and regional socio-economic developments. The wharf of Nam Cua Lo including land and water areas on both sides of Cua Lo navigation way (from the downstream of Bara Nghi Quang Dam to Rong cape). The scale includes general ports, specialized berths for tourism, passenger berths and berths for vessels of up to 30,000 tons. The wharf of Bac Cua Lo in Bac Cua Lo area (from Rong cape to Ga cape area) includes genral and bulk berths for vessels of 50,000 - 100,000 tons, specialized berths for liquid cargo for vessels of 50,000 tons and international passenger vessels. Dong Hoi Wharf from Dong Hoi Cape bordering Thanh Hoa to North of Dau Rong Cape (Chay Mountain) functions as general port area with specialize berths serving Dong Hoi Industrial Zone and neighboring industrial zones. Developing Dong Hoi general ports supporting Nam Nghi Son Wharf to be a port group of Nghi Son - Dong Hoi, which includes general berths and specialized berths for vessels of 50,000 to 70,000 tons…